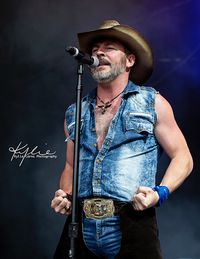 Chad Freeman & Redline was founded on March 13, 2009.  It didn't take long before CFR quickly formed their own sound and started performing locally.  Local shows quickly grew into regional shows as they became regulars in Las Vegas on the strip and performing for PBR and NFR.   Over the years they have been able to hit the stage for NASCAR, Super Bowl, CMA Fest and countless festivals, events and weddings.  Eventually Chad was picked up to tour internationally and has been on stage in Australia, New Zealand, Germany, Poland, Canada, Mexico, Chile, France and Switzerland to name a few.  Through it all Redline is happy to be celebrating it's 10 year anniversary in 2019 and with the lineup as strong as ever looking forward to performing on many stages in the year to come!